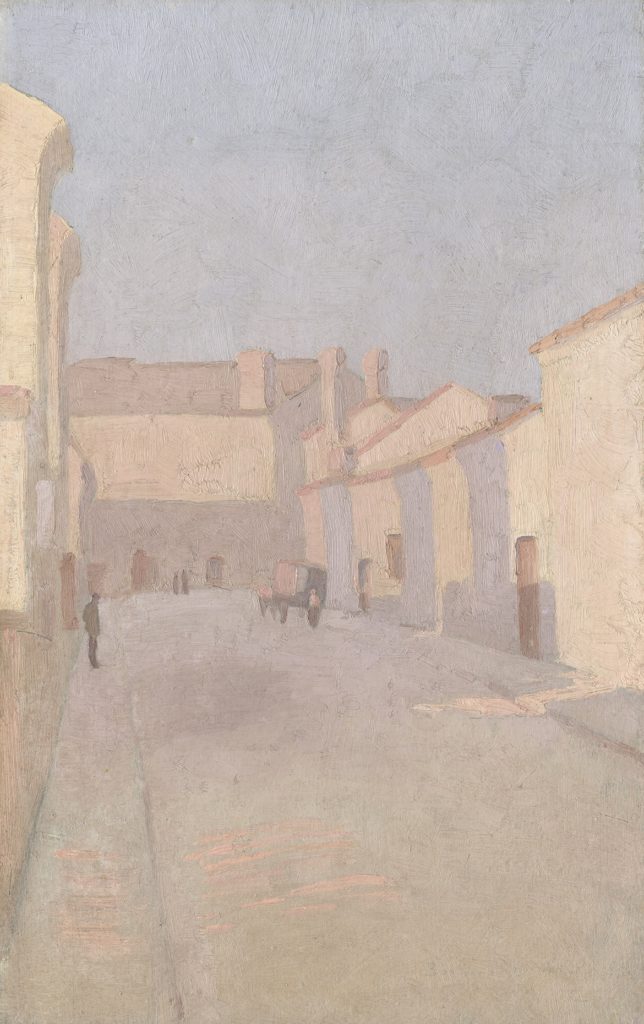 This pleasing work was painted by Charles Lacoste on a bright autumnal day in November 1893, on which the sun radiated off the facades of a narrow street in the historic centre of Bordeaux. Born in Gironde, Lacoste lived in Bordeaux until the end of the 1890’s. Whilst his oeuvre reveals a fondness for flatness and synthesis, traits shared with the Nabi artists, the atmosphere and colour palette of his works is more akin to the symbolists. As such, he developed a style which resists being categorized under any particular historical movement. From 1894, Lacoste, whose mother was of English descent, made several trips to London. There he found inspiration in the works of Constable and Turner, which he studied on frequent visits to the National Gallery, and which influenced his own fascination for capturing atmospheric effects in landscapes.

Lacoste’s article published in La Plume in 1897 provided immediate clarity on his artistic intention, with its title La simplicité en peinture. He translated everyday scenes into two-dimensional compositions of surfaces, searching for fleeting atmospheres throughout the day, such as dawn, twilight, moonlit nights and in meteorological effects such as fog and fumes. In the present work, luminous contrasts are the main source of effect, focusing on the bright light vibrating off surfaces, and with a clear absence of action. The iconography of facades and roofs became recurrent in Lacoste’s future oeuvre and provided the ideal subject to translate his artistic beliefs, much akin to Symbolism.

Lacoste settled in Paris in 1899, and soon came under the wing of the philanthropist and patron Arthur Fontaine, who hosted one of the leading intellectual salons in the city. It was there that Lacoste became acquainted with such figures as the writers André Gide, Paul Claudel and Paul Valéry, composers Claude Debussy and Darius Milhaud, and artists such as Odilon Redon, Edouard Vuillard, Eugène Carrière and Maurice Denis. It was Gide who, in 1904, introduced Lacoste to the gallery owner Alphonse Eugène Druet, who exhibited his work until Druet’s death in 1916.