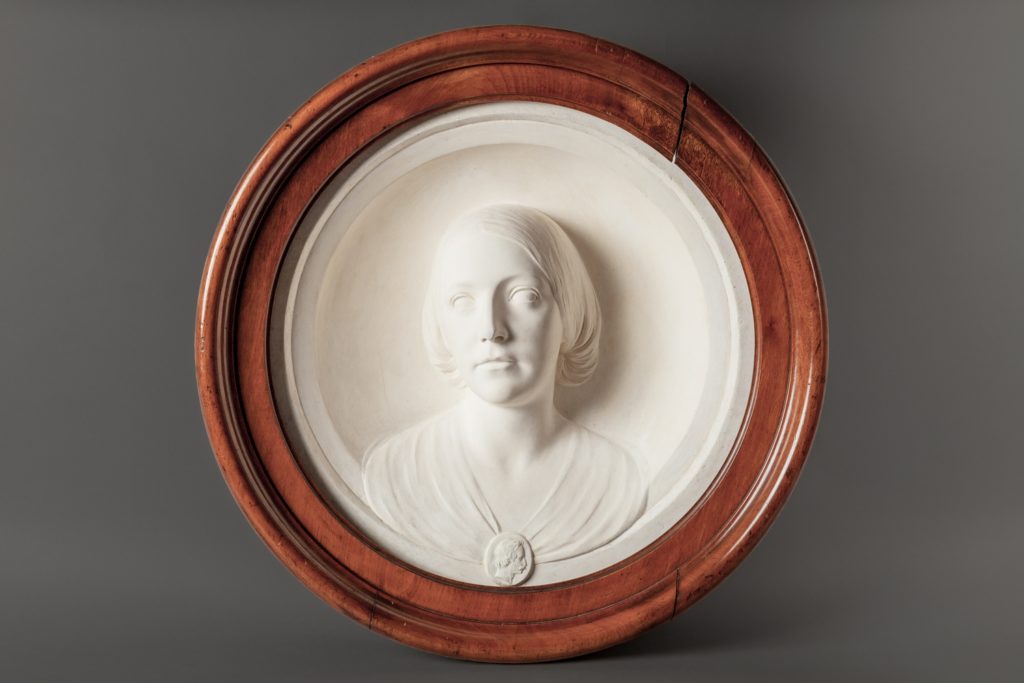 A rare and unique original plaster cast, served as the preparatory model for the marble medallion depicting Lady Trevelyan still in his original place today, in the central hall of Wallington House. Furthermore, Lady Trevelyan, the woman elegantly portrayed by Munro here, is a key personality of the Pre-Raphaelite circle. She was the wife of Sir Walter Calverley Trevelyan, 6th Baronet, a wealthy and scientifically minded aristocrat. They both shared a common passion for geology and art. As an artist herself, Lady Trevelyan has made Wallington Hall, her husband’s property in Northumberland, the centre of High Victorian cultural life. She numbered amongst her friends the art critic John Ruskin, the poet Algernon Swinburn, the historian and philosopher Thomas Carlyle and the members of the Pre-Raphaelite Brotherhood. Lady Trevelyan even became one of the earliest northern English patrons of Dante Gabriel Rossetti (1828-1882). All these personalities and artists have left their mark inside the country house of Wallington Hall, such as Munro with his marble medaillon.

Munro was closely associated to the Pré-Raphaelite movement I, he was a close friend of Thomas Woolner,  one of the founder-members, and only sculptor, of the Brotherhood. Munro’s work consists of portraits, busts and monuments, historical statues and works of imagination. He developed a decorative style on his own. Close to Gabriel Rossetti, Munro realized his most famous work “Paolo and Francesca”, inspired by Dante Gabriel Rossetti’s drawings of scenes from the “Inferno” after Dante Alighieri. William Michael Rossetti, the poet and son of Gabriel, wrote about the two artists’ relationship : “Gabriel never had a more admiring or attached friend than Munro”[i]. This group is a perfect illustration of the Pre-Raphaelite movement. The original plaster version is currently on display in Wallington Hall too.

Above all, Munro was an excellent portraitist. This medallion portrait in hight relief depicts the face of Lady Trevelyan in a formal simplicity. Her hair is tied in a low bun, her lips outline a discreet smile. This sculpture of Munro is spare and clean of clutter, the deep relief of Lady Trevelyan head casts strong shadows that vividly emphasises the sitter features. The intimacy character of this work is superb. First by its technique : this first plaster come as close as possible of the artist’s creativity work and conception. Secondly, by its detail : Lady Trevelyan wears herself a medallion with the portrait of her husband around her neck. With this work we are diving into the Pré-Raphaelite universe, and into the work of a master sculptor of the time.