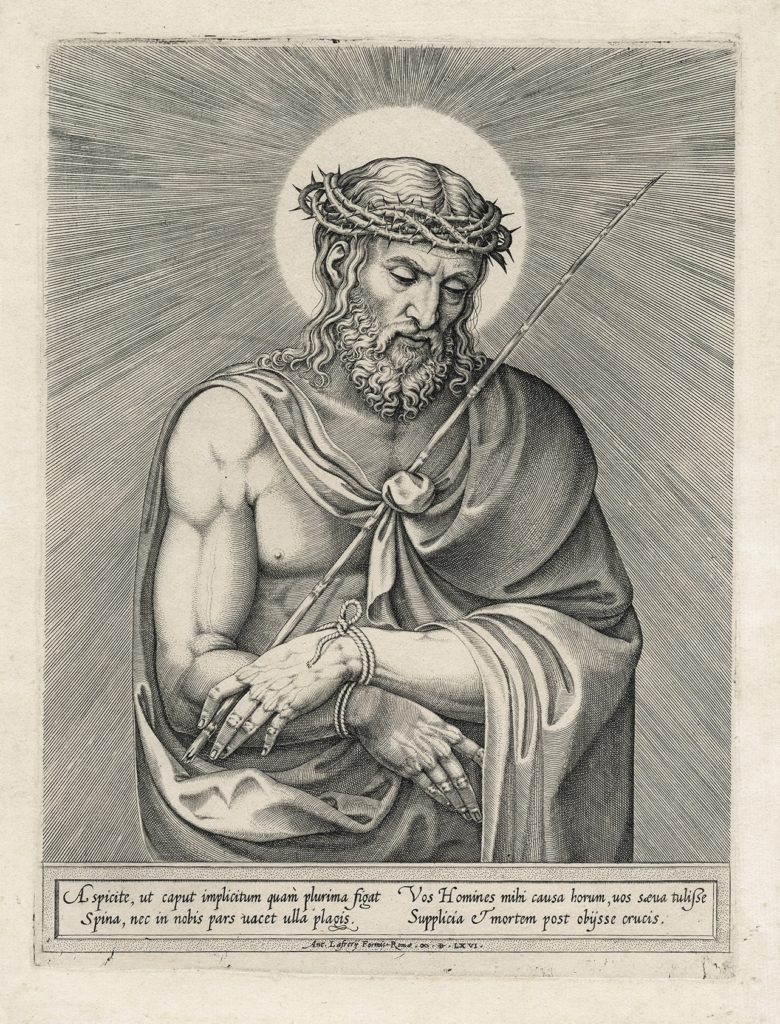 This fascinating and top-end quality engraving after a composition by Titian is not signed in the plate and so would remain the work of an anonymous engraver. However, given the technically highly distinguished, refined printmaking method, it could be argued to assign the engraving to a Nordic artist in Rome, at the time. The author would be the Dutch Cornelis Cort. From the pre-Goltzius generation of Netherlandish printmakers, Cort was unquestionably among the best ones. Formerly active in the Netherlands since 1553, he moved to Venice in 1565 and lived in the house of Titian for nearly a year. He produced there a few remarkable engravings based on Titian’s works.

However, in early 1566, Cort arrived in Rome, and he immediately produced for the publishers Antonio Lafreri and Antonio Salamanca, sometimes with the help of Taddeo Zuccari, some profane and religious subjects after Venetian artists, i.e. Titian and Federico Zuccari. Lafreri clearly attempted to corner the Venetian topics and market, and the links and experience of Cort in that matter were certainly an asset for him. In the present hypothesis, Cort then created the current engraving in the year of his arrival in Rome, as for instance if he was trying to convince his new clients of his technical skill. Not sure it was necessary: also called the Cornelio Fiammingo, Cort at that time was the only Netherlandish printmaker in the Lafreri team and undeniably his most talented engraver. Cort made another Ecce homo for Lafreri but later, in 1572 and after Etienne DuPérac (Rubach no. 66). The two plates are recorded together in Lafreri’s own inventory as “Doi effigie diuerses di Ecce homo”, i.e. “Two different images of Ecce homo” (see Rubach, no. 68).

The present sheet is a magnificent impression, nuanced and slightly printed with tone, and with margins. The print is extremely rare. Only one other copy is recorded, in the collection of the Escorial Library, close to Madrid (see La Colécion de Grabados de El Escorial, Barcelona, 1988, p. 369 and ill. 4b). Given its upmost rarity, the plate might also have been a trial and then never really published.