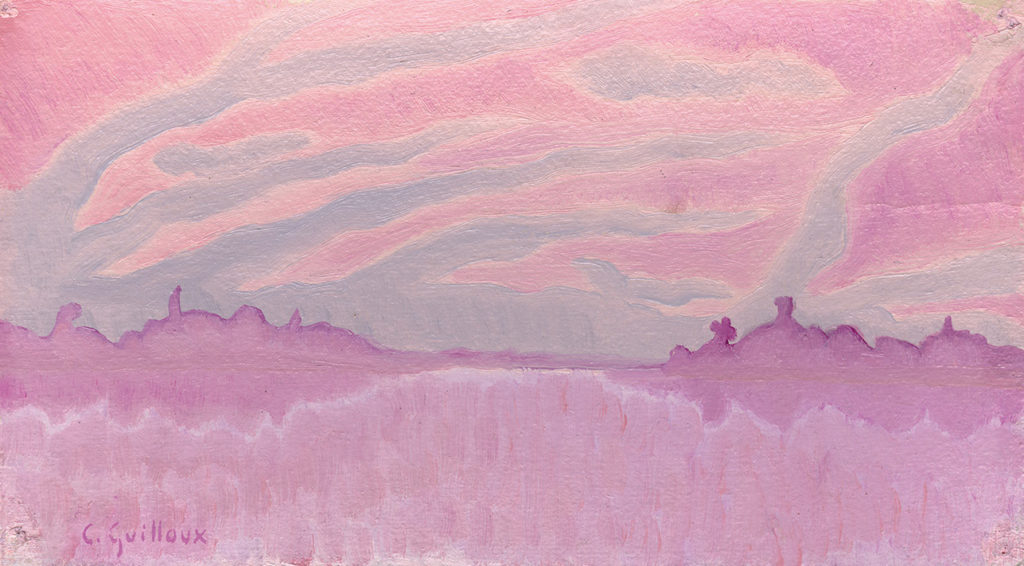 Beautiful and symbolist oil on paper by Charles Guilloux, which faithfully abides to the name of “painter of light” awarded to the artist. It is one of the best examples of the artist’s prowess to render luminous atmospheres with a remarkable economy of means and limited to one shade of color. From 1892, he limited his painting to a few types of patterns and reached a visual unity thanks to pure shades and expressive lines. This refined and poetic vision, almost Japanese, constituted a new way to interpret nature as well as, at the same time, maintaining its direct impression. Solely achieved with this pink monochrome palette, this landscape is much more than the work of a colourist. The mysterious horizon line, the spectacular clouds, and shiny reflects in the water, creating the work of a true symbolist master.

An autodidact, Guilloux welcomed numerous artistic movements like impressionism, symbolism, the Nabis or even Japonism, the latter of which’s forces he successfully synthesized in his coloured landscapes as well as creating a personal universe. He was clearly influenced by Eugène Delacroix and Michel-Ernest Chevreul’s writings about the simultaneous contrast of colours. Critics were full of praise from his first participation at the Salon des Indépendants in 1892, and to some Expositions Impressionists et Symbolists that awarded him the status of master, while several of his works were acquired by amateurs.

Usually strong with contrast, Guilloux imagined here a poetic and extremely mellow scenery. His monochrome landscapes are rare to find and reveal a vey modern aspect of his oeuvre.