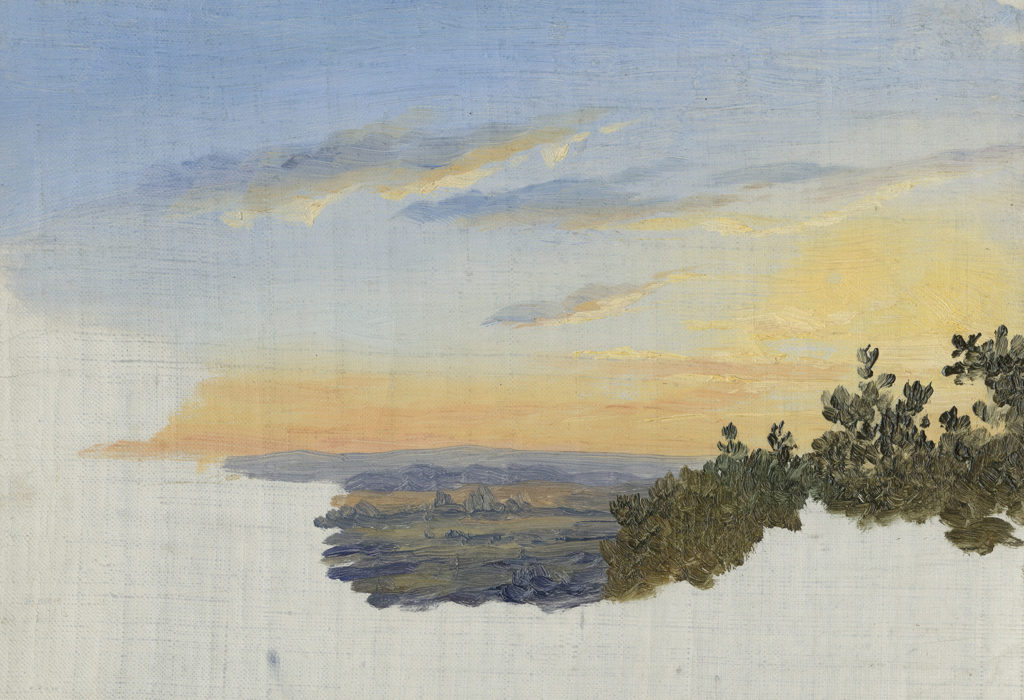 Regarded now as one of the most fascinating landscape painters of the early Belgian scene of 19th century, Gilles-François-Joseph Closson remained almost unknown until the revival of a group of his works at the Musée des Beaux-Arts of Liège in the 1980s, and the discovery, in 1994, of an ensemble, in private hands, of canvas and oils on paper, presented at the TEFAF Maastricht the same year. This is amazing, as Closson has an inimitable style of so-called unfinished work, although built as it is. His oeuvre remains very rare, as his wife donated to Liège virtually a large part of the studio, three hundred drawings and fifty oil sketches on paper. The appearance on the market of the 1994 group was then a fortunate discovery, and now some major collections keep them, as for instance the Metropolitan Museum of Art (through Eugene Thaw), the National Gallery in London (through John Gere).

Closson took part of a group of major plein-air sketches artists from the future Belgium, including his contemporary Simon Denis, and later Ferdinand de Braekeleer the Old and Jean-Michel Cels. After studying in Paris seven years under the history painter Antoine-Jean Gros, Closson moved to Italy from 1825 to 1829, with a scholarship from the Fondation Darchis, to refine his art practice. Captivated by the surroundings of Rome and Naples, Closson fully devoted himself to the landscape painting, with around four hundred works in five years. However, and it is fascinating, the homogeneity of the subjects and texture prevent to bestow an exact chronology within these years.

The present three works came from a private collection that bought them in 1994. Painted in the Roman region, they concentrate on the warm light of the poetic landscapes of the southern countryside. The three compositions are constructed on a horizontal axe and the sky almost invests the half of each paper. These paintings betray Closson’s virtuosity in the treatment of light and his commitment in studying luminous effects, reflections and the myriad shifting of colours. Also, through the use of a thick and saturated oil paint, the final tones are intensely opaque on the canvas or the paper, and they offer a powerful visual impact.

Despite being extremely precise and accurate, Closson works are mostly all unfinished in the bottom part, sometime on right or left sides. The skies only and the main motifs have been worked. This proves a desire to grasp his impressions of nature without technical artifice, but with realism and speed. Painted en plein air, these works highlight the sensibility of his gaze and the spontaneity of his practice.