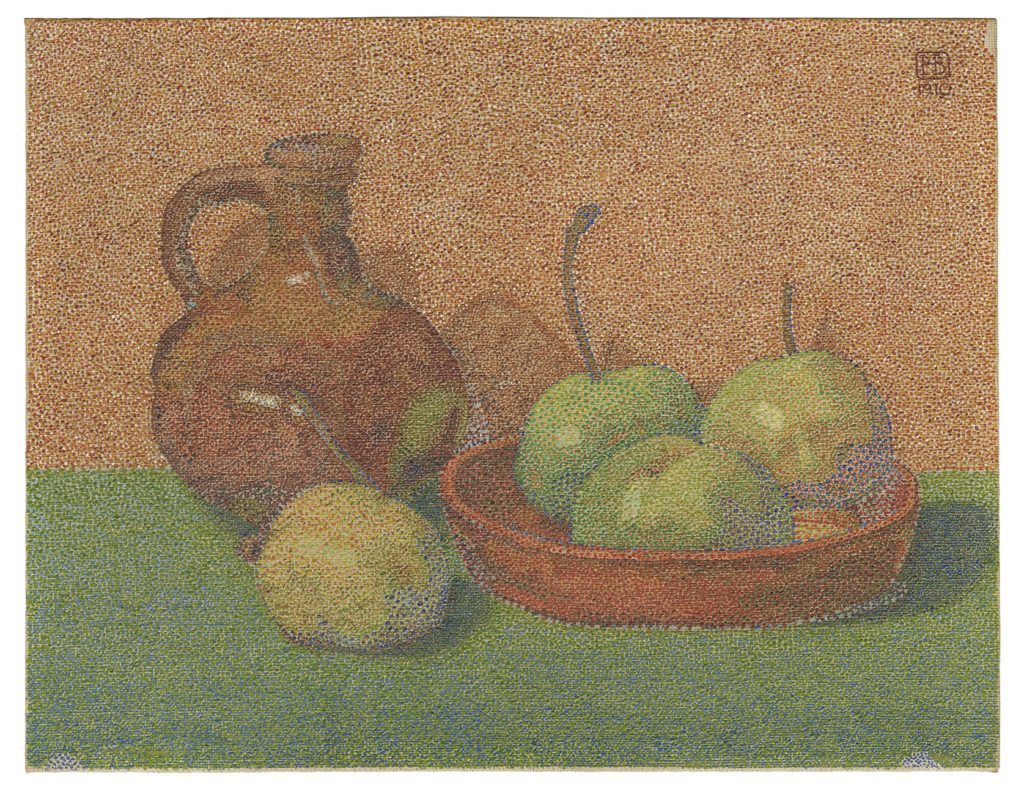 Stunning pointillist still life by the talented and famous Hendricus Bremmer. In 1906 Bremmer wrote Een inleiding tot het zien van beeldende kunst (An Introduction on How to Look at Art). Between 1903 and 1910 he was the editor of monthly portfolios called Moderne Kunstwerken (Modern Works of Art), each containing nine art reproductions with additional commentaries. From 1914 to 1938, he edited Beeldende Kunst, a comparable monthly publication. He lectured extensively and encouraged and promoted a number of Dutch avant-garde artists such as Bart van der Leck.

In 1906 Bremmer met Helene Kröller-Müller, the wife of an industrial magnat. He inspired her to transfer her allegiance from Delft porcelain to modern art. Over the thirty years during which he successfully advised her, she acquired a considerable number of paintings by Vincent van Gogh, Bart van der Leck, and also Piet Mondriaan, who was one of the contemporary artists most closely associated with Bremmer and his anti-naturalist aesthetic theories. The collection became the national Kröller-Müller Museum at Otterlo, which opened in 1938.

Due to his authority and popularity in the Dutch art world in the first half of the twentieth century, his wide audience credited him with the name of Kunstpaus (Art Pope). Bremmer’s activity as an art critic and teacher gave him an aura of autonomy; his activity as a collector and advisor gave him the status of a connoisseur and introduced him into the art market. His network of relations and contacts with collectors and art dealers made him attractive for young artists. Therefore he was probably the most influential art critic in the Netherlands before the war.

The present Still Life with Apples and a Water Jug by the artist, is signed with Bremmer’s characteristic monogram and dated 1910. A water jug, similar to the one in our still life, can be seen in a photograph of the artist in his studio (fig. 1); the jug reoccurs in several other still lifes by Bremmer. The photograph was taken in 1893, the year in which the artist painted his first pointillist still lifes and landscapes. In the following years, Bremmer made in-depth studies of the scientific principles which formed the foundation of the pointillist school of painting (e.g. by reading Chevreul’s De la loi du contraste, 1839), and himself wrote several publications on the subject.