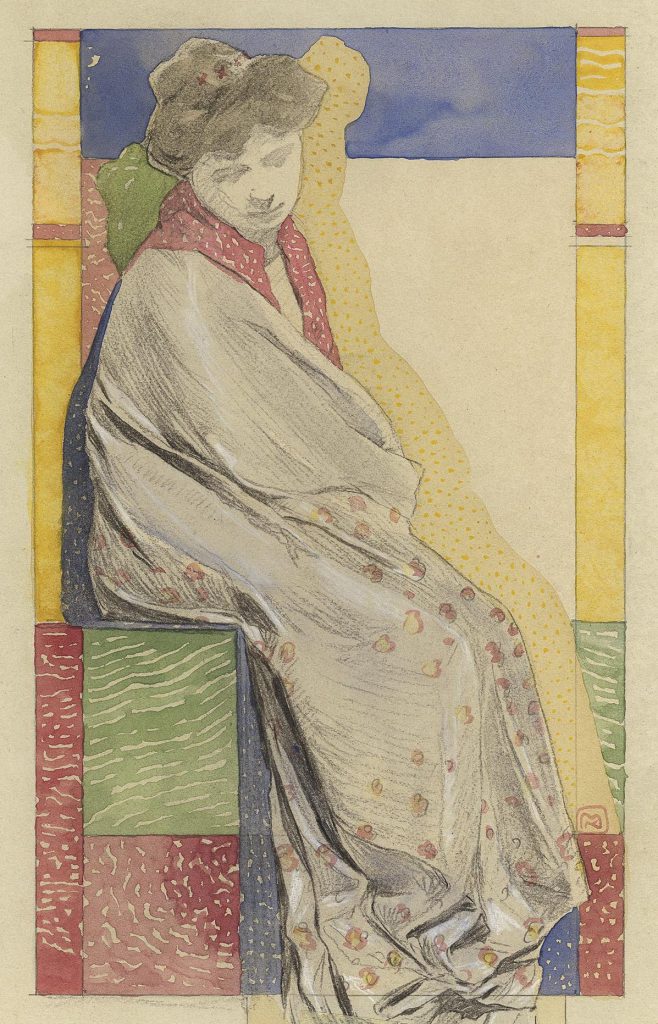 We must say that we have been very impressed the first time in front of this drawing by Kolo Moser, who remains the most active artist in the blossoming of decorative art in Vienna around 1900. As a young artist, Moser started working as an illustrator, especially for fashion magazines where he met Gustave Klimt. They remained friends for life and were both founding members of the Secession in 1897, realizing many projects together. In 1898, Moser widely contributed to the first edition of Ver Sacrum with hundred-forty illustrations, but also with the lay-out of the journal. He also participated to the decoration of the Secession’s Exhibition hall, inaugurated the same year. He designed stained glasses windows and ornamental relief for the front façade. Named professor in 1899 at the Kunstgewerbeschule of the Österreichisches Museum für Kunst und Industrie, he influenced a whole generation of Austrian creators. Few years later, in 1903, he participated in the Wiener Werkstätte studio and became co-director with Josef Hoffman. Together, they established a new style of design, known today as the “Moser-Hoffman style”. He ultimately produced a large variety of objects from graphic art, textiles, decorative art, to interior architecture and scenography. However, he always followed his governing principles: the research of innovative decorative motives and the incorporation of art in everyday life.

A central theme of Moser’s oeuvre is the woman figure; from symbolist Art Nouveau nudes to more geometrical silhouettes inserted into decorative background. Our drawing illustrates a recurrent subject: woman clad in a wide and ornamented dress. Recalling the large dress that Silvia Koller worn in her portrait by the artist (sold in 2008 at Im Kinsky), the present dress also evokes a Japanese kimono. Influenced by Japanese culture, Moser designed many textiles, and created four designs of dress between 1901 and 1906, with an attention drawn to the neck line and the sleeves. The woman in our sheet could be his wife, Dita Moser whose face’s features and hair were very similar to the ones of the drawing. Between the softness of the woman’s face and attitude, and the energy of the decorative background, this work combines Moser’s gift for illustration and his constant exploration in ornamentations. From his serpentine motives of the 1890’s to the representation of square and triangles around 1900, Moser was inspired by the evolution of decorative art across Europe, especially in England. Mastering the art of stylisation, he liked to play with the juxtaposition of a variety of surfaces to create strong ornamental composition. Our drawing suggesting the art of stained glass, of poster and fashion, demonstrates the palette of the talents hold by Moser.