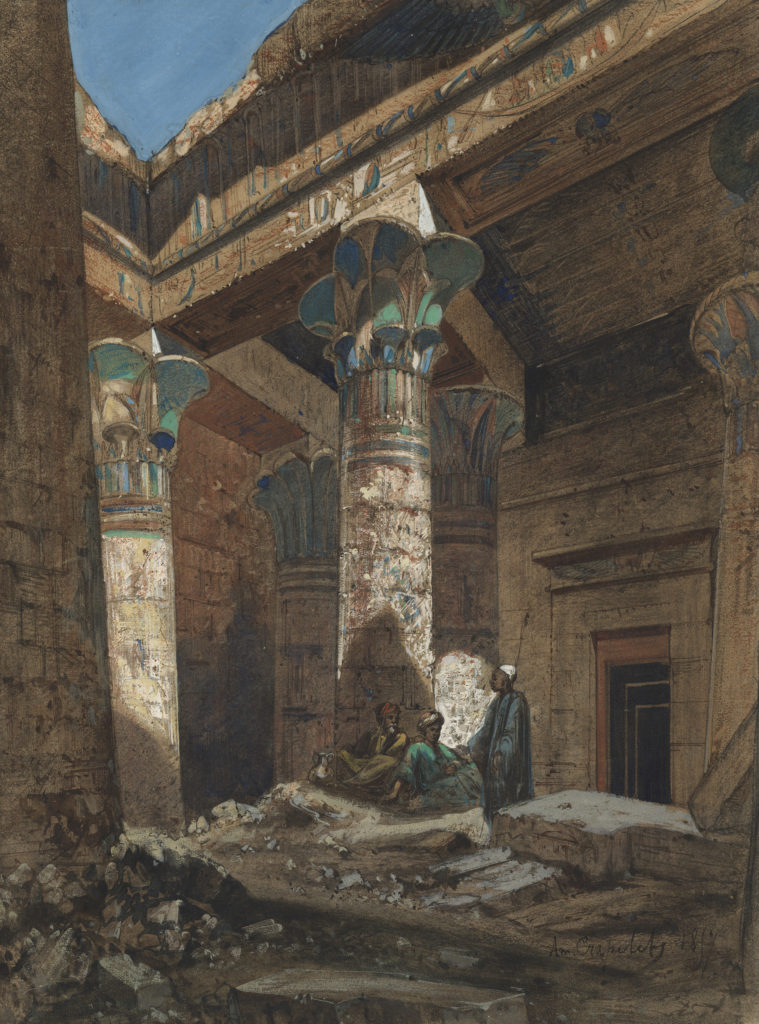 A beautiful architype of the seductive orientalism by Louis-Amable Crapelet. Without sacrificing the topographic exactitude of the scene, the artist achieved to depict a strong sensation of beauty and exoticism of the present Isis temple in Philae. It is very efficient and powerful, a balance between idealistic landscapes and a true depiction of historical sites. Following ideas of Théophile Gautier, Maxime du Camps or Pierre Loti, the Egypt of Crapelet was of course an imaginary construction of a dream.

This bright view of the Vestibule of the Isis temple in Philae was based on a sketch kept in a beautiful album at the Louvre. During his journey at Philae, around 1853, the artist precisely drew the perspectives of columns, with a lovely balance between light and shadow in the architecture. His indications are correctly respected in the final version made here in 1857 with watercolors, in which he added, probably from memory, the rest of the polychromy on the monument. Crapelet always added a decorative touch to his Egyptian representations, with strong and bright colors, which is very seductive. Today, the polychromy is not visible anymore: the temples on the Island of Philae were flooded during the construction of the Aswan Dam in 1947, and later they were moved to the Island of Agilkia.

Trained in Paris, Crapelet was educated by many different artists. His first master, Pierre Adolphe Badin, was an artist specialized in History painting and director of the Manufacture des Gobelins. Afterwards, he worked under Charles Séchan, specialized in Opéra décor. He learned from Camille Corot the art of landscape, and how to create sensuous luminous atmosphere. Finally, he received from the marine artist, Jean-Baptiste Henri Durand-Brager his passion for travel. He left France, in 1852, to discover Egypt and Algeria, until 1854. At his return, he kept traveling through Tunisia, Italy, Greece and in Asia Minor but he mainly promoted his own Orient, and with success.