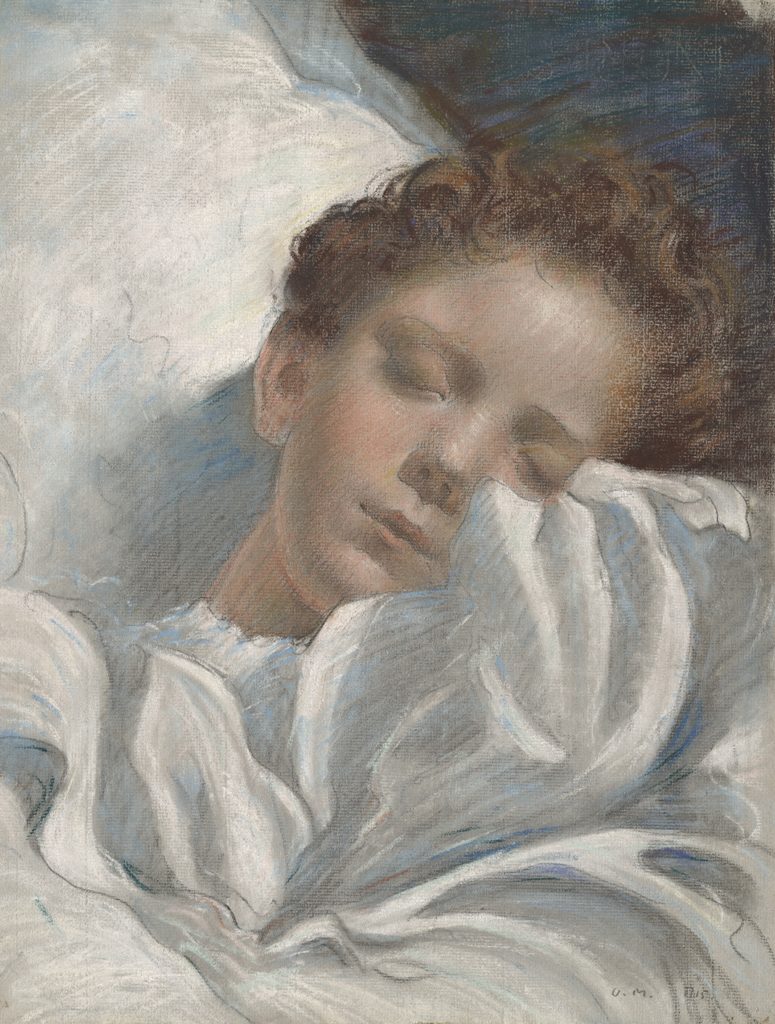 Early on in his artistic training, Merson developed a great taste for colour and mystical compositions. In this case, the subject of his drawing is far from mystical, however. The sheet is focused on the sleeping face of a young adolescent, surrounded by bounteous layers of draped fabric. Hiding part of his face, the folds of fresh white covers, treated with strokes of blue and orange, look like a jabot or a ruffle. The innocence and tranquillity of the boy’s expression is underlined by the softness of his red and brownish curls. A simple and powerful composition, entirely devoted to the portrayal of sleep, this work recalls Jean-Baptiste Greuze’s Le Petit Paresseux (1755, Musée Fabre, Montpellier).

Merson explored the subject of sleep in other notable works, for example his 1879 version of the Repos pendant la fuite en Égypte (Museum of Fine Arts, Boston), which depicts the Virgin and Child sleeping in the desert at the feet of an enormous sphinx. He reproduced this iconography many times over the years (Musée de Céret, Nice and San Simeon, Hearst Castel). In works such as these, sleep becomes the focus, adding a dimension to the religious subject of the painting. Children were often central figures within Merson’s oeuvre, sometimes used as allegories within his compositions, for example as angels in the panels La Vérité and La Fortune from his compositions for the Hôtel Watel-Dehaynin in 1901 (Musée d’Orsay, Paris).

By 1915, the year Luc Olivier Merson created this beautiful drawing, the French painter and illustrator was in the twilight of his academic career. His ascension had started in 1869, having won the Prix de Rome for his emotionally charged painting, Soldat de Marathon (École des beaux-arts, Paris). Following the customary stay in Italy, Merson returned to Paris, where he secured numerous official commissions for the burgeoning construction projects initiated by the Third Republic. Notable examples include the Palais de Justice (1877), the office of the Sorbonne university’s rector (1886), the Hôtel de Ville (1889) and the Opéra-Comique (1897). Merson continued to work for private commissions and exhibited regularly at the Salon, particularly religious works inspired by the early Italian Renaissance.