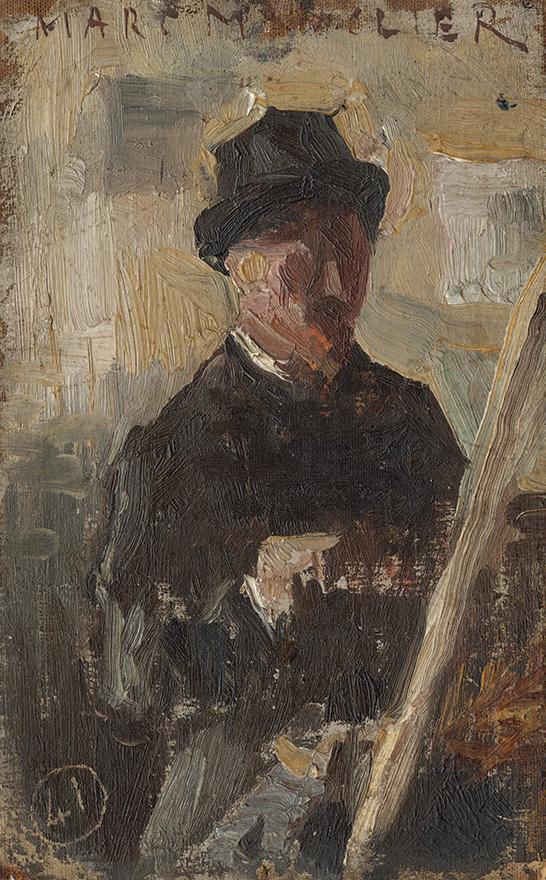 Marc Mouclier arrived in Paris around 1884 and started frequenting the Ecole des Beaux-arts and the Académie Julian where he met artists such as Ker-Xavier Roussel, Pierre Bonnard, Louis Valtat and Edouard Vuillard, who introduced him to the Nabis’s circle. In 1889, Mouclier exhibited for the first time at the Salon des Champs-Elysées a portrait of his father. The next year, his painting entitled Gardien de l’Ecole des Beaux-Arts which depicted a man disfigured by a fall, was judged scandalous by the bourgeois visiting the Salon. After this event he preferred showing his artistic production at the Salon des Indépendants.

Along his practice of painting, he also started experimenting with engraving. In 1895, Emile Straus edited a text with illustrations of some of Mouclier’s best works, celebrating the artist both as a painter and an engraver but mostly as an independant figure : « Marc Mouclier est du groupe des patients insensibles aux sarcasmes, ceux qui tracent avec lenteur le sillon dans le Champ de la Vie, sans se renfermer dans l’étroitesse d’un cénacle, d’une école, sans s’étriquer d’un procédé, sans se bercer de la béatitude des œuvres aisées. ». His practice of engravings and lithographs was triggered by his collaboration, as an illustrator, to the publication of the journals La Critique and La Revue Blanche. In the manuscript of his memories, Edouard Vuillard evokes his debt to Marc Mouclier, declaring that Pierre Bonnard, Xavier Roussel, Maurice Denis and himself had learn so much from him in the context of these journals. Following this experience of publishing, Mouclier started his own journal, L’Omnibus de Corinthe, in october 1896. It was a handwritten publication produced with “Papyrus” (Emile Straus), Willy, Georges Bans, Paul Redonnel, Oblief (Alcanter de Brahm), Alfred Jarry but also the artist Désiré Fortoul.

Fortoul started making illustrations for Mouclier’s journal, for its second edition, in January 1897. It might be around the same time that Marc Mouclier decided to paint his portrait. Désiré is represented dressed in black and wearing a hat, working at his easel in an undetermined space. The soft tones used to depict the background could suggest the inside of a studio: a white square on the right side of the composition can suggest the light coming out of a window. The figure of the painter is brushed with large strokes of thick paint treated in impasto. The face of Fortoul is not detailed, only sketched with different touches of brown. This very rare representation is a testimony of Mouclier’s circle and activities both as a painter, an engraver and an editor