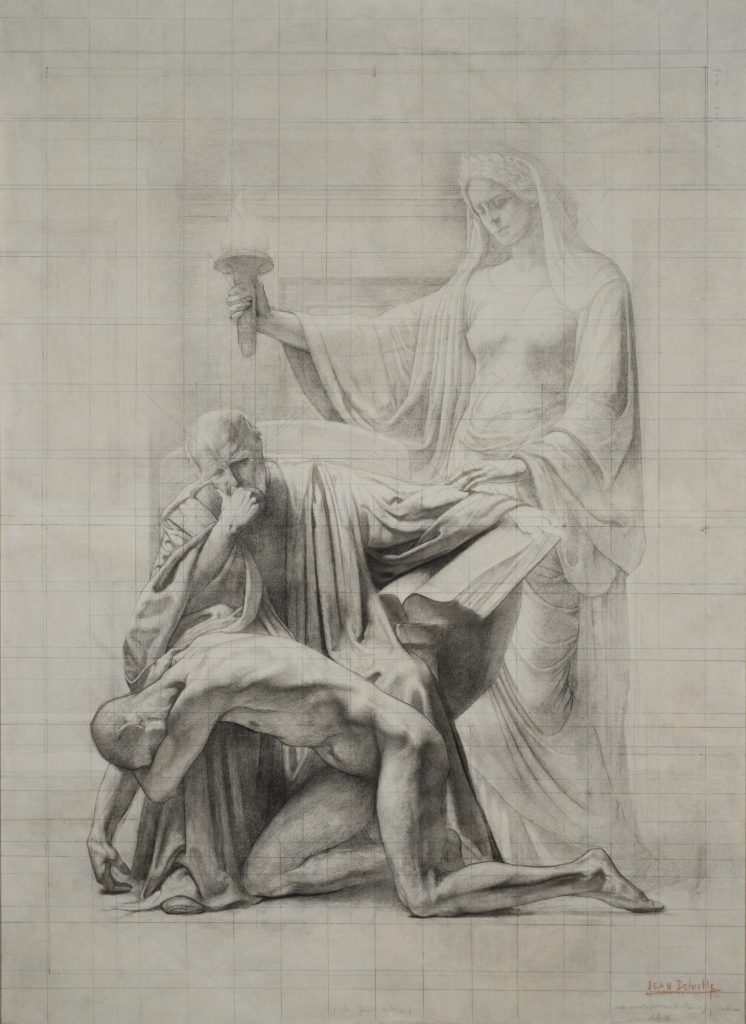 This spectacular work by Jean Delville is a preliminary drawing for one of his monumental decorative panels at the renowned Palais de Justice in Brussels.

Influenced by Joséphin Péladan in his belief that the mission of the arts must be to spread esoteric precepts among the masses, Delville promoted monumental art in public spaces, founding in 1920 La Société de l’art monumental to this end. He went on to win public commissions, among them the decorative program for the courthouse in Brussels, a huge edifice of a Greco-Roman inspiration, built between 1866 and 1883 by Joseph Poelaert. From 1907 to 1914, he worked on this vast artistic challenge, composed of five murals; a central representation of Justice, surrounded by four depictions of Justice through the ages (biblical, Christian, medieval and modern). Our drawing represents the modern period. The murals were later destroyed by a fire in 1944. Works relating to this commission, such as the present sheet, are the precious remains of Delville’s masterpiece, the artist’s most ambitious project.

The creation of these works was noted in the newspaper Le Soir in 1907 along with long descriptions of the mysterious iconography and idealistic meaning behind these theatrical compositions. The composition of our sheet is perhaps the most elegant and peaceful of the group: Justice, personified by a feminine figure holding a shining light, stands behind a man of the law, himself reflecting upon the fate of the criminal on his knee. A notable aspect of this drawing, is that Delville chose to portray a famous Belgian at the center of his composition : Jules Lejeune (1887-1894). A renowned lawyer, Professor of Law at the University of Brussels and Minister of Justice from 1887 to 1894, Lejeune was a charismatic man and contributed to the development of judicial power in Belgium. During his time as Minister, he realized numerous reforms and established important concepts, such as for the protection of children, as well as contributing to the evolution of Criminal law in Belgium. He was, therefore, the ideal individual to embody the representation of “Modern Justice”. This is a sheet loaded with powerful meaning, whilst also illustrating Delville’s talent as a draftsman. It is the last piece of this importance still in the family’s possession.

The present work will be included in the catalogue raisonné, currently in preparation by Myriam Delville.