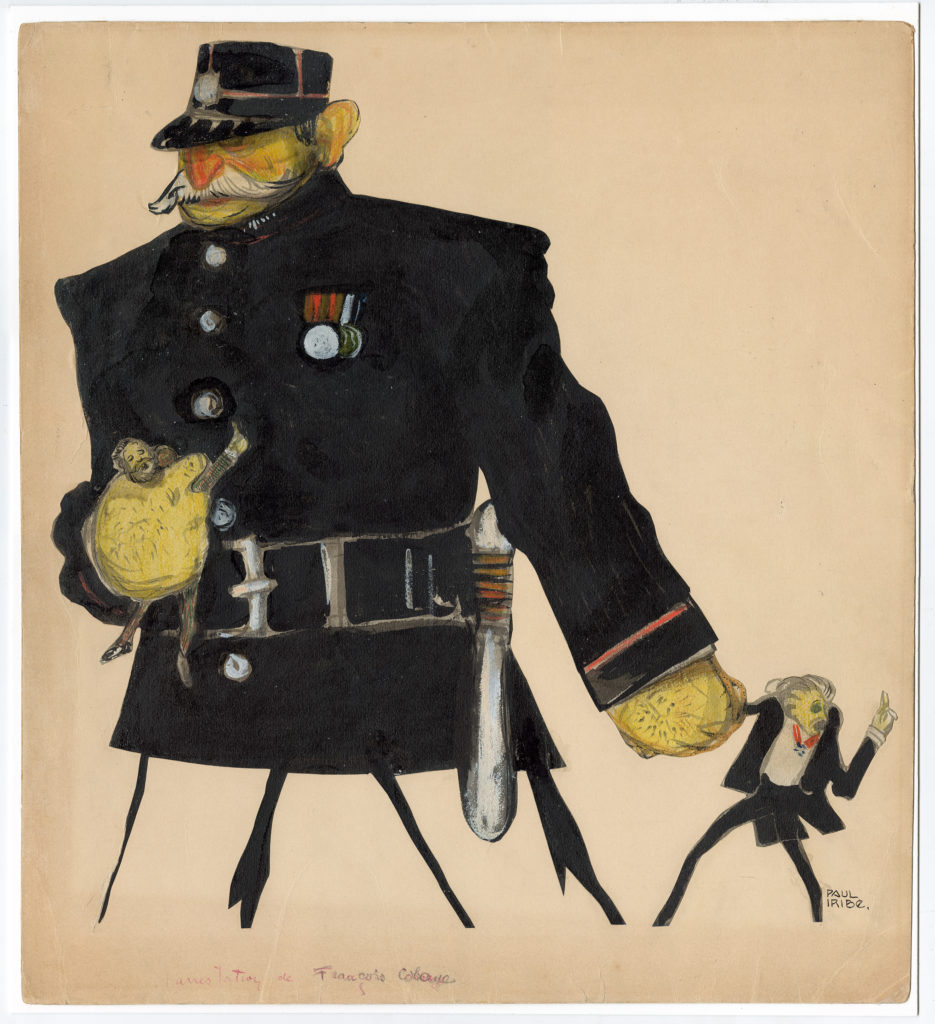 Paul Iribe, a graphic designer and satirical illustrator, has influenced both top-end fashion designers as well as the public’s opinion in times of political disenchantment. Satire, simplicity and aesthetic design can best describe his oeuvre, which illustrates the fiascos of the French politics, the distress of WWI and the elegant flamboyance of the following années folles.

Inspired by contemporary political events, Iribe created powerful, and sometimes violent, images filled with dark surfaces of black ink on white paper, such as demonstrated in L’Arrestation. The simple details – Iribe’s signature style – in the gendarme’s uniform and the small figures show the forceful arrest of two high ranked men. Almost strangled to death, the man in the gendarmes gigantic hand attempts to protest, whilst the other is being dragged hastily, with great fear in his eyes. The originality of Iribe is his use of collage, specially for the press illustration field. Through this technique, he achieved to increase the strong contrast of his compositions, and create image with powerful visual impact.

Attracted to art from an early age, Iribe was an autodidact who did not frequent any artist studio or decorative arts school. Instead, he took on a typography apprenticeship at the daily journal Le Temps, where he would work as an editor.[1] This practice gave Iribe the fundamentals of journalism, thereby teaching him the aesthetic principles of composition, layout and conciseness in information. His satirical drawings would demonstrate this acquired mastery. His early cartoons, at the age of seventeen, already exhibited his taste for an original layout and provided regular collaborations with magazines such as Journal de Paris, Le Sourire and L’assiette au Beurre, quickly ranking him amongst the best humourists of his time, while maintaining a strong critical look at the French society.

Iribe would continue to create political cartoons throughout his life – he established his own journal Le Témoin between 1906 and 1910 –, but would diverge to decorative arts from 1908 onwards, creating mundane fashion illustrations for the renowned designer Paul Poiret[2], producing opulent decors for theatre plays and Hollywood movies, and designing lavish jewellery with his muse and lover Coco Chanel.