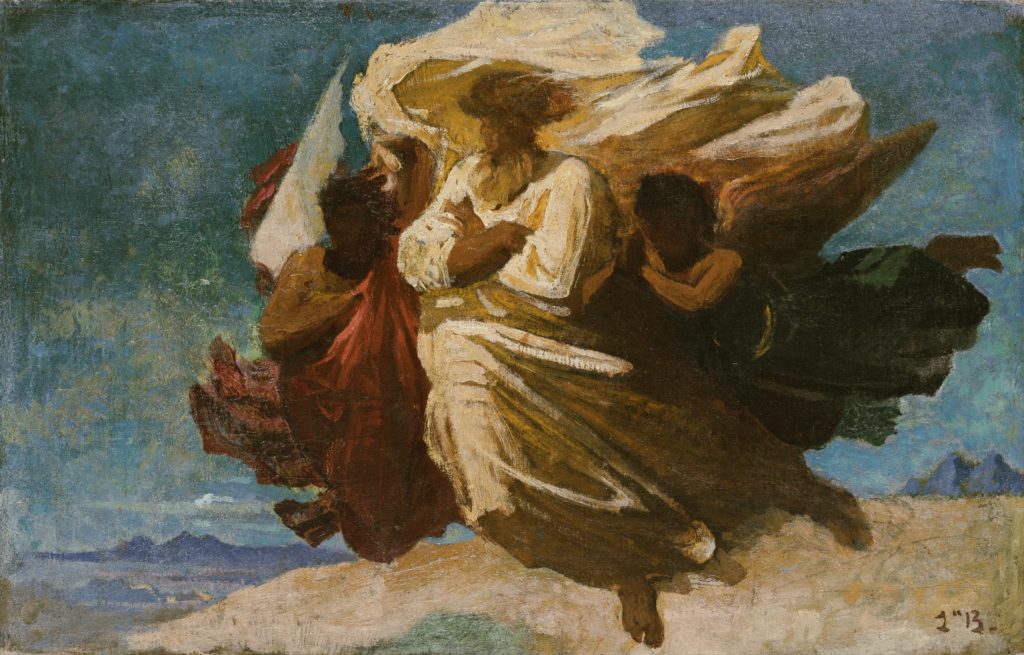 Though Bonnat is now mostly known for the numerous portraits he created of his contemporaries, the painter did paint religious works throughout his career. Some were official commissions, notably the mural of Le martyre de Saint Denis for the Panthéon in Paris (1880), while others such as Le Christ en croix of 1874 (Petit Palais, Paris) and Job in (Musée d’Orsay, Paris) were made to be exhibited at the Salon. Bonnat sought new ways to represent these themes. Here, the effect of the lighting is such that the saint is not so much carried upwards than forwards, into the space of the viewer. In a way Bonnat exhibited his extensive knowledge of 17th century painters such as Velázquez and Ribera in the vigorous brushwork, dramatic lighting and monochromatic palette. The landscape may be one that Bonnat saw himself on his journey to the Middle East in 1868.

Contemporaries would have called this work “realist” for the traits mentioned above, as well as for the thick application of paint and broad modelling of the figures. In this, Bonnat shows an affinity to the work of Gustave Courbet, his rival for the Salon’s medals. Unlike Courbet, however, Bonnat was a devout Catholic who believed religious paintings served a didactic purpose. See about this point the survey by Siulolovao Challons-Lipton, The Scandinavian pupils of the atelier Bonnat 1867-1894, New York, 2001, pp. 14; pp. 25-28. A second version of the present work, but a gouache on paper and of smaller size, is kept in the collection of the Musée Bonnot-Helleu in Bayonne.

For an biographical outline, Léon-Josephe-Florentin Bonnat was born in Bayonne in 1833, and early in his life, he was introduced to painting by his uncle, the landscape painter Charles Sarvy. Bonnat received extensive training, much of which was dedicated to copying old masters. When the family moved to Madrid in 1847, Bonnat was able to study the 17th century Spanish painters in detail, which proved to be a lifelong inspiration. The painter was later much praised for his extensive and practical knowledge of historical painting, which he blended into his own style. Bonnat was also most renowned for his vivid portraits of contemporaries, including those of Victor Hugo, Adolf Thiers and Léon Gambetta. The hefty price he charged for these works allowed him to build an important art collection, notably of drawings, which can be seen nowadays at the Musée Bonnat-Helleu, in his native city of Bayonne.