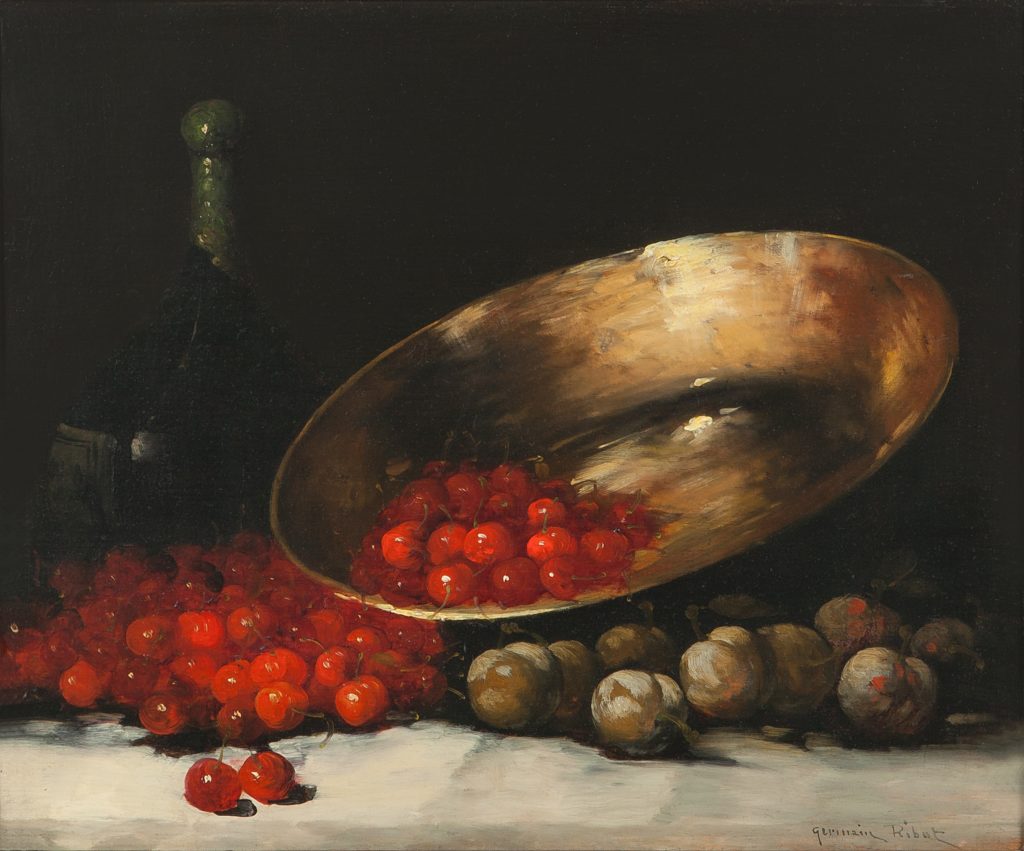 This beautiful still life was made by the French painter Germain Ribot, after 1875. The subject of this work is the light that strikes a copper basin, filled with red cherries spilling on to a white tablecloth. A few green plums complete the composition in the foreground. Behind these elements, a round bottle can be discerned, suggesting that the fruits might be there to prepare some sort of liqueur. The simplicity of this composition can be associated to the rediscovery of Jean-Siméon Chardin by French artists in the nineteenth century. Its darkness however reminds us of the Spanish models used by Realist painters of the same period. Another painting signed by Ribot and representing the same elements, the copper basin, the cherries and the plums, but presented differently was sold a few years ago.

Germain Ribot was the son of the French Realist painter Théodule Augustin Ribot (1823-1891). Taught by his father, he followed closely in his path, representing genre scenes and still-life using dark tones in the manner of Spanish painters. He was also trained by Antoine Vollon (1833-1900), a friend of his fathers, with whom he specialized in still-life paintings. After his formation, Germain Ribot started exhibiting his pictures at the Salon in Paris in 1875. The next year, Jules Claretie mentioned his name in one of his critiques, suggesting that he had inherited his father’s talent. In 1876, Théodule Augustin Ribot had presented a portrait of his family at the Salon, including Germain and his sister Louise-Aimée Ribot (1857-1916), also a painter, exalting the familial dimension of his studio. Both kept working alongside their father until he died, in 1891. As Germain Ribot died only two years later, his production is mainly focused between 1875 and 1893. Since he contributed to his fathers’ production, signed pictures of him are quite rare. A few of his pictures appear in international public collections, notably a beautiful Still Life with Dead Birds and a Basket of Oysters at the Cleveland Museum of Art. But also in the United Kingdom, at the National Museum of Wales, the York Art Gallery and Berwick Museum & Art Gallery.